When you think of Video Vixens you probably think of Karrine Steffans, Melyssa Ford, Buffy the Body. These women have made a name for themselves by being overtly sexy in music videos and men’s magazines. Although these women commonly call themselves models, many will beg to differ. Yes they model, but when compared to more mainstream models, what are these ladies actually modeling. They typically don minimum amounts of clothing or skin-tight fabrics that leave little to the imagination. 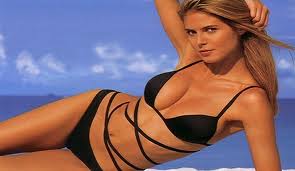 An obvious difference in a Heidi Klum compared to a Melyssa Ford is the body type. Video vixens are systematically chosen by their curves and voluptuous bodies. Runway and print models are chosen for their bodies as well but the criteria is much different, primarily the best canvas to show off the item of clothing or jewelry being advertised or promoted. Many video models are gyrating or posing in such a way that you can barely see the clothing. So what are they advertising?

Sex, at least in most cases. Grant it, Heidi doing the same pose as Buffy the Body and in the same bathing suit would be much less overtly sexy.  But my point is, if you name a woman at the top of her game in each category, Runway or Print and Urban or Video, you have to ask what is each model most synonymous with? For Runway or Print you may say a particular fashion designer or brand. So for someone like Adriana Lima you may think Victoria Secret or Guess? or for Naomi Campbell you may think high fashion or Vogue magazines. But when you think of Esther Baxter or Melyssa Ford what do you think of? Do you think of a particular hip-hop artist or rapper, or do you think of a particular men’s magazine or do you think sexy poses and lingerie?

As a woman if I’m looking to purchase a new bathing suit or lingerie, I’d probably check the latest Victoria Secret catalog before I’d check King or XXL magazine.

Of course you want some level of physical attraction when choosing a model for anything. And I imagine Nelly chooses more curvy models for his Apple Bottom line because its the best canvas for his clothing line. But should Melyssa be able to call herself a model  in the same fashion as Heidi Klum or Tyra Banks.