The last leg of our EuroTrip ended in Ibiza, a small island off the coast of Spain. I was looking forward to this beach getaway the most. I love the beach, the lazy time just enjoying the sun, the breeze, and the water. 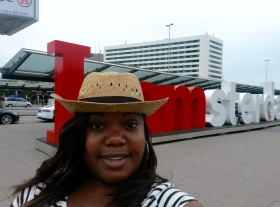 Of course our flight was delayed, but once we landed in Ibiza we took a cab to our AirBnb, grabbed food nearby, and walked around along the beach. We met a woman, Alesandra, who was about our age dancing in the street to a live band, her mother and grandmother sitting nearby encouraged me to dance with her, so I did. Afterwards she offered us free tickets to the club she worked at and told us to text her beforehand to confirm if she was working.

We woke up the next morning and walked a bit to find tickets to do excursions etc. we got the information we needed but didn’t book anything. 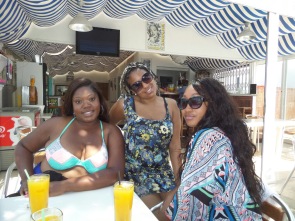 We found a place nearby to get breakfast right on the beach complete with delicious mimosas. Let the fun begin!

After breakfast was the designated time for sun & sand. But before we could get our relaxation on we were intrigued by a speed boat pulling a group in a what can only really be described as a huge inflatable circular water raft.  Instant fun and we signed up immediately!

The four of us dropped our belongings, grabbed the life vests and hopped into the raft holding on to ropes on either side of us.  The ride was quite bumpy and a few of us fell off the inflatable benches onto the raft floor with the velocity of the boat making it pretty difficult to gain composure.  I’m pretty sure a few of us sustained a bruise or two, but it was so worth it.  It was unexpected fun, especially since the boat driver was deliberately maneuvering the raft to keep us from gaining composure and getting drenched in the process. 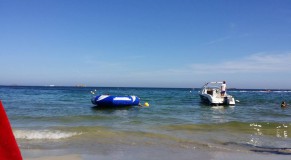 I don’t remember the cost and unfortunately (or fortunately) it wasn’t captured on any camera. But here’s a shot of the boat and raft in the water.

We made it back to the beach where we rented an umbrella and chairs.  A few of us went to a nearby shop to purchase some libations. 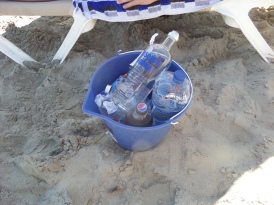 Luckily we happened to find a store with an ice bucket special that included a bottle of alcohol, ice, water, cups and juice.  I did a bit of negotiating for the price since we wanted to swap out the type and brand of alcohol pre-designated for the deal but the liquor bucket ultimately made for a great beach trip.

After a quick photo shoot we went back to relaxing on the beach. 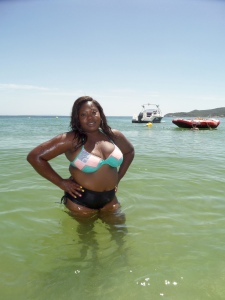 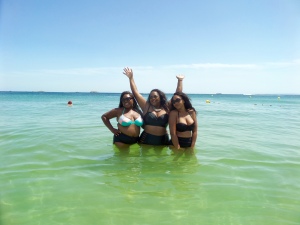 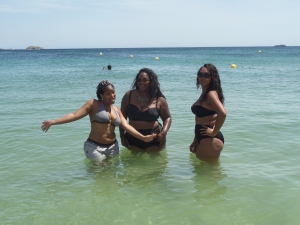