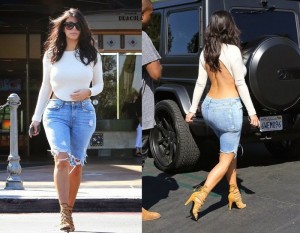 Kim Kardashian-West is definitely winning in this assemble.   This is the type of attire I want to see her in, the fashion icon that turns heads and inspires women and fashionistas alike.   Too often we see her in a midi-skirt and blazer on her way to nowhere important.  Not that there is anything wrong with the extra sexy business woman look, but I often doubt that she is actually going to a business meeting or somewhere that would demand that type of attire.

But this look right here! HUN-NEY!  If I had that body, I’d wear it in every color! This is a fun daytime look but could easily be worn in the evening with dark wash skinny jeans and nude heels.

We can’t see the top of the back in this photo but I imagine she’s wearing a bra that crosses high in the back.  I’m always curious about her undergarments though. She’s blessed to have “balanced” curves. Meaning she’s got back and boobies, but we rarely see her bra-lines or the top of her Spanx.

Now photographers have captured her oops moments in the past where we’ve gotten a glimpse of her Spanx on a windy day. And in this photo, snapped a Teyana Taylor’s album listening party, if you look closely you can see the outline of her bra, but only faintly.

I can’t recall seeing nipples through her clothes. Maybe it’s just me who is actually curious about these things, but whatever secrets she has for camouflaging her underwear in all of her clothes, she needs to sell that.  No woman wants to have her lumps and bumps showing or evidence of undergarments that help us get that “snatched” look, so Kim, help us all out and share your secrets girl.  She certainly has enough money to get her clothes altered to add “built-ins”.  But for us “reg-u-lah” folks, I’m sure she has alternatives that she uses in a time crunch.

Kimmy Kakes is definitely a style-icon but I just love this outfit.  She has the perfect figure to make this look amazing.  I don’t think there is anyone else that could wear this and have the same impact.

Reality TV: The Root of Divorce 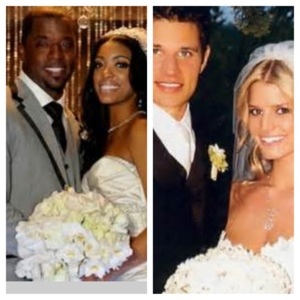 I can create a very long list of my favorite Reality television shows. And a list just as long of the marriages that dissolved after the marriage was put on public display via Reality TV.

Marriage in itself is difficult. Caring for another individual, the shared financial responsibility, children, family drama, you name it. Having your relationship put in front of millions on a weekly basis seems to be the exact recipe for the perfect divorce.

Why so many couples choose to share their most intimate moments with all of the world for a few dollars, I’ll never understand. What happens in many of these marriages is that, friends, the media, and just loyal television watchers begin to comment and impose their thoughts and feelings on the couple and their marriage. In the more recent divorce cases of Porsha and Cordell Stewart. Porsha is/was married to Cordell Stewart a former pro-football player and their relationship was aired in the latest season of BRAVO’s Real Housewives of Atlanta (RHOA). So many people had negative things to say about Cordell being controlling and Porsha not being independent enough or having much of a voice.

As a fan of the RHOA series, I think Porsha was right to defend her husband and her marriage. Not every relationship is for everyone. But for the most part I think that she was well within her right to not go to the strip club with the other ladies. In any relationship you need to choose your battles wisely. In her opinion arguing with her husband over a trip to see some naked women, probably wasn’t worth the drama it would have caused in their relationship. In her confessional, Porsha later revealed that she felt that by going to the strip club, she’d be partaking in degrading behavior and in her heart she had a ministry for women she wanted to develop. And I agree with Porsha that, that type of behavior wouldn’t be particularly conducive to empowering women through ministry.

Another alternative reason for the failed marriage is probably how Cordell saw himself on the show. Nobody knows what really goes on behind closed doors in a marriage. But once you open the doors and windows, you will certainly be put on display for all to comment. And once you really see how you’re portrayed on screen, it’s no debating the facts. Maybe Cordell didn’t like the way Porsha was portrayed and what people would say about her naiveté.

The bottom-line is that marriage vows are exchanged between two people. Those two people decide what works for their marriage and what doesn’t. Allowing outsiders to comment and doubt how you govern your marriage is setting the relationship up for failure. Especially, when many of those outsiders don’t have the best interest of the couple in mind when they give advice or commentary.

There are few marriages and relationships that have survived Reality TV. What’s their secret? Whatever it is they could definitely bottled it and sell it for millions. The one that immediately comes to mind is Ozzie and Sharon in the TV series The Osbournes. The Osbournes may be one of the few couples that survived the curse of reality tv, and by the looks of recent reports, their marriage is on the rocks. Another is Khloe and Lamar I like them together and I wish both couples the best.

A few of marriages that have failed the Reality TV test are:

English: Nick Lachey and Jessica Simpson at the Headquarters of US Marine Corps, posing for the camera. (The couple later hit the road with their “Nick & Jessica’s Tour of Duty”.) (Photo credit: Wikipedia)

Bobby and Whitney (Being Bobby Brown)