The Mainz Festival, The Speakeasy and Cooky’s Reloaded

Friday night I went to the Mainz festival by the river. (I’m a week behind on posting so this is from the previous Friday.)  I’ve learned that Germans like to have festivals for any reason. And I couldn’t begin to tell you the meaning behind this one besides just being another reason to eat and drink your choice of alcoholic beverage.  The Mainz festival was similar to a big carnival, complete with rides, local goods, and of course beer and wine. I was excited about the crepes, they were yummy and I was hoping it would help soak up some of the alcohol I had consumed.  When I realized that my tab was growing largely due to my choice of mixed drinks and my colleagues who choice wine and beer had minimal tabs, I quickly switched to wine.

Wine costs less than water in many cases. So hydrate well or you’ll find yourself dehydrated AND intoxicated very quickly. If you’re on a budget skip the hard liquor and opt for the beer or wine.

Later that night, closer to midnight, I headed out with another friend to hit the club scene.  We met up with one of his male friends who had stepped outside of the spot he was in to meet us and direct us back there.  This place was unmarked and blended easily into the neighborhood.  He rang the doorbell and we waited for about 5 minutes before someone came to the door to let us in.  There was a small group that had come and was waiting behind us to get in as well. Unfortunately, they weren’t allowed inside.  We met up with another female inside who was a really cool Kiwi. 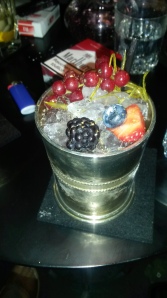 Surprisingly, the music didn’t bleed into the outside, so it was hard to tell what the vibe would be like inside, but it was definitely live inside.  It almost reminded me of a speakeasy from the way you were allowed or not allowed in. But the inside décor was nice as was the crowd.  The bartenders were very attentive to the patrons. They made unique drinks that were quite tasty and garnished with fresh fruits that I wasn’t quite able to identify.  This place was different than any place I had ever been but hoped to return again. I made sure to thank the bartenders as I was leaving, in hopes that they would remember me, should I return, and not get the treatment of the group they denied entry to. I think the name of the place is called “Popular”, and the guy who escorted us mentioned that he usually ended his night there instead of beginning it there, so I’m not sure if it’s more of an after-hours spot or even what time they close.  By the time we left we could hear the music spilling outside that we couldn’t before.

Ironically, we left after an hour or so and made our way over to Cooky’s.  This time however,  it was a decent crowd and the music was decent and I danced a bit. Although the music was mostly from the early 2000’s, it was still pretty good.